← Fraudster: The Novel
ECB: Risks of a negative interest rate →

A look at a report published by Global Financial Integrity in Dec 2013 confirms the explosive growth of one aspect of white-collar crime in India – Illicit Financial Flows.

The chart below illustrate the spread of this cancer: 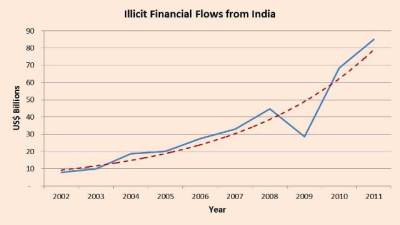 Illicit financial flows from India have grown ten-fold in the nine years under consideration. When the GDP growth has been in single digits, these cross-border flows have grown at a CAGR of 30%.

An obvious question that comes up is whether this is a feature of developing countries, which have weaker controls and higher moral hazard.

Global Financial Integrity’s report suggests that most developing countries suffer from this malice. However, with a ten-fold increase, India beats China, Brazil, Mexico, Russia, and pretty much every developing country by a handsome margin, except South Africa. The rise in India has been five times that of China, ten times Mexico and three times Brazil. 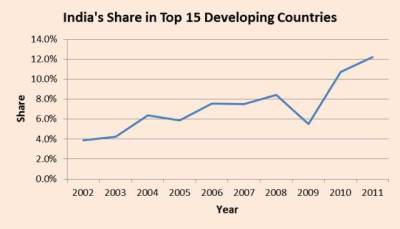 It appears that we have also outpaced the rest of the developing world in this regard. Our share has more than tripled from 3.9% to 12.2%.

This is perhaps a testimony to how much our business & political environment has been eroded.

← Fraudster: The Novel
ECB: Risks of a negative interest rate →