The Hindu: “… a whodunnit modelled on the lines of classic mysteries with an old world charm …“

The Telegraph: “… the influence of Agatha Christie on the author’s writing is unmissable. Enjoy a nostalgic trip back to your teenage years when crisp crime thrillers kept us awake for long nights.”

National Herald: “… the narrative tradition of Christie and Doyle has found a worthy successor in RV Raman.”

Hindustan Times: “This is no regular whodunnit though! It is pacey, clean and doesn’t have a single dull moment.” … “What might feel like a simple plot is dealt with beautifully.”

Orissa Post: “The influence of Agatha Christie and John Dickson Carr on the narrative is compelling … The narrative style also shows influences of author Ngaio Marsh. Like Marsh, Raman’s prose is what really makes him stand out. It is subtle, clear, ironic, but always elegant and peppered with witty liners; his characters sharply, sometimes hilariously, drawn.“ 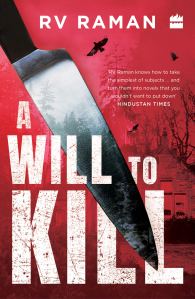 An ageing and wheelchair-bound Bhaskar Fernandez has finally reclaimed his family property after a bitter legal battle, and now wants to reunite his aggrieved relatives. So, he invites them to his remote Greybrooke Manor in the misty Nilgiris – a mansion that has played host to several sudden deaths; a colonial edifice that stands alone in a valley that is said to be haunted by the ghost of an Englishman.

But Bhaskar has other, more practical problems to deal with. He knows that his guests expect to gain by his death, and to safeguard himself against violence, he writes two conflicting wills. Which one of them comes into force will depend on how he dies. Into this tinderbox, he brings Harith Athreya, a seasoned investigator.

When a landslide occurs, temporarily isolating them and resulting in a murder, Athreya finds that murder is not the only thing the mist conceals.

Watch a short video about the book.